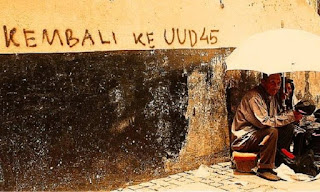 The 1945 Constitution of the Republic of Indonesia


Whereas freedom is the inalienable right of all nations, colonialism must be abolished in this world as it is not in conformity with humanity and justice;


And the moment of rejoicing has arrived in the struggle of the Indonesian freedom movement to guide the people safely and well to the threshold of the independence of the state of Indonesia which shall be free, united, sovereign, just and prosperous;


By the grace of God Almighty and impelled by the noble desire to live a free national life, the people of Indonesia hereby declare their independence.


Chapter III. The Executive Power
Article 4
Article 5
Article 6
Article 7
The President and the Vice-President shall hold office for a term of five years and shall be eligible for re-election.


Article 9
Before assuming office, the President and the Vice-President shall take the oath of office according to their religions, or solemnly promise before the Majelis Permusyawaratan Rakyat or the People's Representative Assembly as follows:


"In the name of God Almighty, I swear that I will perform the duties of the President (Vice-President) of the Republic of Indonesia to the best of my ability and as justly as possible, and that I will strictly observe the Constitution and consistently implement the law and regulations in the service of the country and the people."


"I solemnly promise that I will perform the duties of the President (Vice-President) of the Republic of Indonesia to the best of my ability and as justly as possible, and that I will strictly observe the constitution and consistently implement the law and regulations in the service of the country and the people."


Article 10
The President is the Supreme Commander of the Army, the Navy and the Air Force.


Article 11
In agreement with the People's Representative Assembly, the President declares war, makes peace and concludes treaties with other states.


Article 12
The President declares the state of emergency. The conditions for such a declaration and the measures to deal with the emergency shall be governed by law.


Article 15
The President grants titles, decorations and other distinctions of honour.


Chapter IV. The Supreme Advisory Council
Article 16
Chapter V. The Ministers of State
Article 17
Chapter VI. The Regional Governments
Article 18
The division of the territory of Indonesia into large and small regions shall be prescribed by law in consideration of and with due regard to the principles of deliberation in the government system and the hereditary rights of special territories.


Article 20
Every law shall require the approval of the People's Representative Council.

Chapter X. The Citizens
Article 26
Article 27
Article 28
Freedom of association and assembly, of verbal and written expression and the like, shall be prescribed by law.


Chapter XIV. Social Welfare
Article 33
Article 34
The poor and destitute children shall be cared for by the State.


Chapter XV. The Flag and the Language
Article 35


The national flag of Indonesia shall be the red-and-white.


Article 36
The national language of Indonesia shall be the Bahasa Indonesia or the Indonesian language.


Article III
The Constitutional Court shall be established at the latest by 17 August 2003, and the Supreme Court shall undertake its functions before it is established.


Article I
The MPR is tasked to undertake a review of the content and the legal status of the Decrees (TAP) of the MPRS and the MPR for decision by the MPR at its session in 2003.


Article II
By the enactment of this Amendment to the Constitution, the Constitution of the State of the Republic of Indonesia shall consist of the Preamble and the Articles.